In recognition of STD Awareness Month, the UpFront Coalition hosted their first community movie night at the Harbor Cinema Theater in Muskegon. The acclaimed musical, RENT, shows the struggles of a group of New Yorkers as the AIDS epidemic effects their community. Over 40 community members attended the free event and enjoyed $1 pop and popcorn during the movie! The coalition encouraged everyone to be “UpFront” about their sexual health and provided resources that included a list of free and confidential testing sites in Muskegon.

During the month of April, the coalition also launched their media campaign to increase awareness around free and confidential testing sites in Muskegon. The campaign features social media ads, bathroom ads, billboards, and hosting physician education lunch and learns that focus on reducing the negative stigma of being open about your sexual health. Muskegon County has the 2nd highest chlamydia rate and 3rd highest gonorrhea rate in the State of Michigan.

For more information about UpFront and a complete list of testing locations visit www.upfrontmuskegon.org. 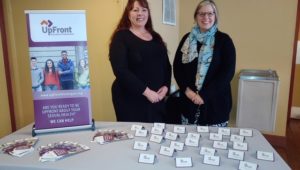 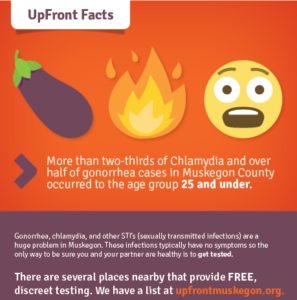