World Aids Day is a day to raise awareness and support those living with HIV. On December 1st, health organizations around the world show their support by offering free, confidential HIV screening, and education at clinics, colleges, and more. The UpFront Education and Awareness Coalition held a World Aids Day Provider Forum on Thursday, December 7th in honor of World Aids Day.

The forum was created to raise awareness of the growing community resources that Muskegon has to offer, educate providers on the growing silent epidemic in Muskegon County regarding chlamydia and gonorrhea, Expedited Partner Therapy, and current data regarding Human Immunodeficiency Virus (HIV). 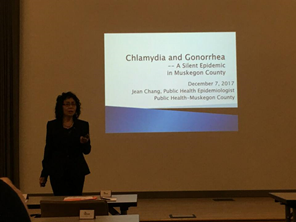 Jean Chang, Public Health Epidemiologist at Public Health Muskegon County, reported the statistics and data following the rise in reinfection rates in Muskegon County. “In 2016, Muskegon rated 3rd in the state for the number of chlamydia positive cases. In 2016, Muskegon rated 2nd in the state for the number of gonorrhea positive cases”. Takeaways concluded that young people ages 15 to 25 account for more than half of all new STDs and the biggest challenge that healthcare providers face are barriers to timely treatment of partners of persons infected with STDs.

Kristine Judd-Tuinier from the Michigan Department of Health and Human Services (DHHS) reported on Expedited Partner Therapy (EPT). EPT is the practice of treating the sex partner(s) of persons diagnosed with chlamydia and/or gonorrhea without an intervening medical evaluation. EPT allows healthcare professionals to provide patients with antibiotics or prescriptions for their partners without requiring a visit by that partner. Kristine noted that treatment of the partner is critical in preventing further transmission and reinfection. From a hospital’s standpoint, treating STDs effectively is important to healthcare systems because any new STDs cost the U.S. healthcare system over $15 billion every year. 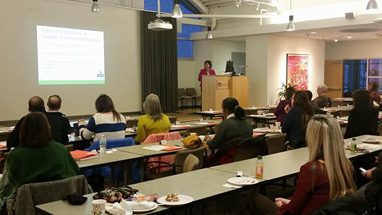 Shelia Wilson, Nursing Supervisor for Public Health Muskegon County, stated that, due to a partnership with Health Project, Public Health Muskegon County was able to receive doses of Cefixime (one of the antibiotics used to treat gonorrhea) to distribute to patients and their partners who test positive. Shelia updated the audience on the STD free antibiotic treatment voucher. Vouchers can be used by anyone in Muskegon County who needs treatment for chlamydia or gonorrhea and cannot afford the prescription or even just the co-pay. The voucher is only valid at participating pharmacies (listed on the voucher) and with a doctor’s prescription, whether it is hand carried by the patient or called in to the pharmacy by the doctor’s office.

Lastly, Dr. Bruce Olson, Infectious Disease Specialist at Mercy Health’s McClees Clinic, reported on the current HIV/AIDS data in Muskegon. What is HIV? HIV is a virus spread through certain body fluids that attacks the body’s immune system, specifically the CD4 cells, often called T cells. Over time, HIV can destroy so many of these cells that the body can’t fight off infections and disease. In Muskegon County, there are 103 positive cases per 100,000. In 2017, McClees Clinic has provided services to 170 patients, with 14 new acquisitions. Dr. Olson stated that there are those who are seeking treatment and know that they are HIV positive, but there are also people who know that they are HIV positive and are not retained in medical care. Anti-viral medications are given to a patient with HIV. There are many different types of HIV, so it is important that the patient receives the best medication that will work for them. It is crucial that HIV positive patients are not engaging in risky behaviors with other HIV positive patients. Once a patient is on antiretroviral medications, Dr. Olson stated that another prevention method is called U=U which stands for (undetectable = untransmittable). Once the viral count is undetectable through the use of antiretroviral medications, the patient is very unlikely to transmit the virus to a negative HIV person. STDs predict the number of HIV risks among men who are at high risk, which again confirms the notion that if a patient is already infected with an STD, the risk of contracting another STD is even greater, such as HIV. 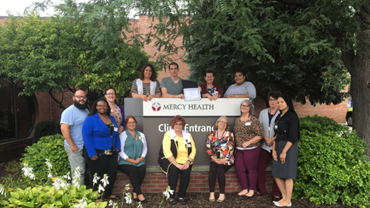 McClees Clinic offers PrEP (Pre-exposure prophylaxis). PrEP is for those who are at a very high risk in contracting HIV (i.e., IV drug use, the homeless, teens, MSM ages 18-26). PrEP is an HIV medication that is taken daily to lower chances of getting infected. PrEP can stop HIV from taking hold and spreading throughout the body. Post Exposure Prophylaxis (PEP) is also offered.  PEP is an antiretroviral medicine (ART) that is taken after potentially being exposed to HIV to prevent becoming infected. PEP should be used only in emergency situations and must be started within 72 hours after a recent possible exposure to HIV.

Providers from Muskegon Family Care, Hackley Community Care, and Mercy Health were present at the World Aids Providers Forum. This forum was to educate the community and raise awareness about community resources, confidential testing, and more, regarding STI/HIV. We hope that providers and prevention leaders were able to take away a lot of useful information and bring it back to their organizations. The more education we can provide around these silent epidemics, the further we are in stopping rising reinfection rates, new STI/HIV cases, and addressing certain disparities within our community.